Savannah, GA – December 6, 2013 – With the recent passing of Thanksgiving and World Toilet Day, we were reminded to be thankful for all good things, especially our toilets. Without the invention of the flush toilet, there would be no luxury portable bathroom, no Royal Restrooms, and oh, what a dismal world it would be.

In honor of the toilet and its famous sidekick toilet paper, we collected a few historical, or hysterical, fun facts for your reading enjoyment and portable restroom education.

Find out for yourself. Get a rental quote on a luxury mobile restroom for your upcoming outdoor event.

Ancient Chinese royalty and British noblemen would be 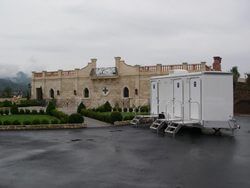 honored to see that their inventions made their way into contemporary Royal Restrooms. See the bathroom features and amenities that transform portable toilets into the regal portable restroom experience™, fit for royalty and enjoyed by “commoners” everywhere.

For rental information, contact your nearest nationwide Royal Restrooms office or get a quote now.

The fun facts in this blog were collected by independent third party sources…for the fun of it!