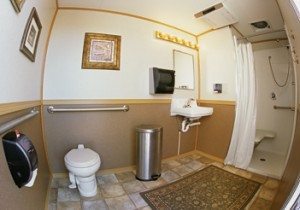 Royal Restrooms mobile shower trailers in New Washoe City provides users with the greatest comfort and also feature inside and also exterior illumination, air conditioning and also heat, on-demand hot water, and exclusive shower stalls. Our mobile shower trailers are offered in a variety of dimensions and also designs, consisting of ADA certified showers to fulfill the requirements of people with handicaps.

Upgrade Your
Event TodayReserve a Luxury Portable Restroom or Shower Trailer for your wedding or special event now.
Portable Showers Details was last modified: May 8th, 2016 by Royal Restrooms

Royal Restroom has franchising opportunities in most of the USA, so reach out to us to discuss your needs.